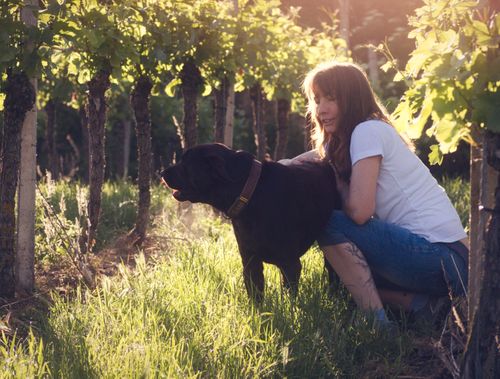 Hello my name is Katja Hauswirth, I am the face behind BARFischgut. I was born in 1976 in beautiful Lörrach, Germany, and now I live with my family, tomcat Baxter and Labrador Sam, in a small wine and recreation resort at the foot of the Black Forest, close to France and Switzerland.

I grew up with dogs, ponies, chickens, cats and rabbits. Even though I spent a lot of my time in the riding stable, my other animals were never neglected - the animals were always my main occupation. The move in of our Sam was finally the reason to found BARFischgut.  I began to question the ready-made food more and more, even after my previous dog Marlow, a very big carper with many health problems, had become a very big carper. After some research I decided to feed the dog according to the prey animal, called BARF for short. So it became my task to deal with the concept of BARF, to give Sam everything he needs for a healthy dog's life through food. The more I got into the matter and dealt with it, the better I could recognize and implement the different connections of this special kind of nutrition. Initially I had fun, but soon it became a passion, so I decided to do an education in this field, first for dogs and now also for cats. But what always caused me difficulties during the implementation, there was nowhere a supplier who covered everything I needed. Therefore I finally opened the BARFischgut - farm shop, here you can get everything you need for BARF!

- BARF, cooking and dietary food plans tailored to your dog / cat and their continuous adaptation

- Consulting in the field of mycological, phyto-, aroma- and Bach flower therapy

- Specialization "Nutrition in connection with behaviour

- Personal accompaniment and support at no extra charge